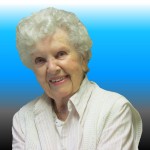 Marie Therese (Terry) Barrett, 93, of Morgan Hill, CA, passed away quietly on September 28, 2019. Terry was surrounded by her loving husband of 68 years, Philip and their six children.

Terry was born in New Rochelle, NY to Earl and Mary Marguerite (Peg) Temple, one of six children. Terry first met her husband in high school where they began dating after senior year. Terry worked as a medical secretary until marrying Phil in 1951 and they began raising their family of six children.

Terry loved music and art and was a proficient seamstress. She became an accomplished guitarist and loved teaching local children. Terry and Phil were very involved in St. Augustine's Church located in Ossining and would perform yearly in the St. Patrick's Day Variety show as a family. Terry would often direct these shows. The family lived in Ossining until the early 70's when they moved to NJ and then settled in CA in 1981.

A talented artist, Terry painted in water color, oil and acrylics. She earned many awards and had numerous one-woman shows on both coasts. Her love of dolls led her to take classes in doll making, soon she was making dolls of all sizes including miniatures. She shared her talent with other doll makers through exhibits and teaching classes. Whatever she chose to do in art, she excelled at.

A private service for the family will be held later this week. In lieu of flowers, the family is requesting donations to the Bonita Springs Hospice, 8545 Monterey Road, Unit B, Gilroy, CA 95020.

Preserve the memories and special thoughts shared
by friends and loved ones with a Memory Book.

We believe that the success of any business requires dedication and professionalism. In our business, in particular, it also requires a great deal of kindness, compassion and attention to detail.